Since October 1972, Rev. A. Russell Awkard has been the Pastor of New Zion Baptist Church in Louisville, Kentucky. He came to the church from a four-year pastorate in Fredericksburg, VA. New Zion had suffered a devastating fire before his arrival; he led the church in building a new edifice in 1973-1974 and expanding the facility in 1985- 1986. Numerous outreach projects have been developed—at home and abroad, including television, jail and prison ministries. 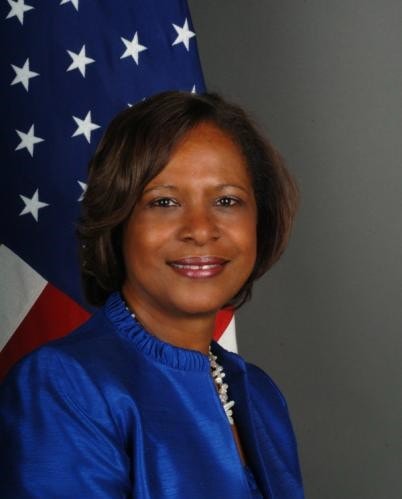 Ambassador Pamela E. Bridgewater has enjoyed a celebrated career as a United States Foreign Service Officer who has led diplomatic efforts that helped change the course of world events. A native of Fredericksburg, Virginia, Ambassador Bridgewater is a graduate of Walker-Grant High School. She earned a Bachelor of Arts degree in political science from Virginia State University, received a Master of Arts degree in political science from the University of Cincinnati, and completed course work and advanced to candidacy for the PhD degree from the American University School of International Service.

Ambassador Bridgewater’s overseas tours include Belgium, The Bahamas, Benin, Jamaica, South Africa, and Ghana. She has served as Deputy Assistant Secretary of State for African Affairs, and was the first African-American woman to serve as Principal Officer (Consul General) in Durban, South Africa. She has the distinction of being the longest- serving U.S. diplomat in South Africa during the historic transition from Apartheid to a non-racial government. As the political officer assigned to cover Nelson Mandela and the African National Congress, a former U.S. Ambassador to South Africa said “Bridgewater established a degree of trust and confidence with Mr. Mandela and the ANC leadership that the U.S. had not previously enjoyed.”

Before joining the diplomatic corps, Ambassador Bridgewater was a university professor at Morgan State University and Bowie State University in Maryland, and Voorhees College in South Carolina. There is a consistent theme that appears throughout Ambassador Pamela Bridgewater’s professional life, and that is her role as both mediator and mentor. As a professor, she both intellectually challenged and encouraged her students who later distinguished themselves as judges, academicians and authors and diplomats.